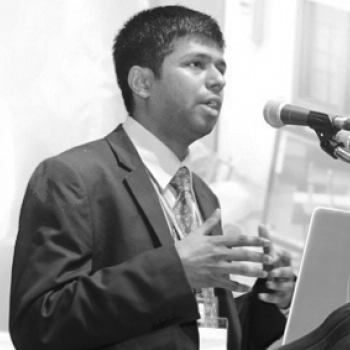 Shyam Diwakar is the Lab Director of Computational Neuroscience and Neurophysiology Laboratory, a Faculty fellow at the Amrita Center for International Programs and an Associate Professor at the School of Biotechnology. He is the Institute Integration Coordinator and Co-investigator of VALUE (Virtual and Accessible Laboratories for Universalizing Education(link is external)); a major virtual labs initiative supported by Sakshat mission of MHRD, Government of India, and Principal Investigator of few other projects funded by Department of Science and Technology.

He was awarded the Young Faculty Research Fellowship under the Sir Visvesvaraya PhD scheme by Department of Electronics and Information Technology, Govt. of India in April 2016.

He holds a Ph. D. in Computational Sciences from University of Milan, Italy and has worked on as a Postdoctoral Researcher at the Department of  Physiology, University of Pavia, Italy. His postdoctoral research was supported by INGENIO grant from Regione Lombardia and SENSOPAC grant from EU framework 7.

Before his doctoral studies, he worked as a Research Assistant at Amrita Vishwa Vidyapeetham, on Machine Learning and Intelligence for two years. He has co-authored a book titled “Insights into Data Mining” which has been published by Prentice Hall, PHI, December 2005 and another book on Computational Neuroscience.

He is a Senior Member of IEEE, Faculty Member of Organization for Computational Neurosciences (OCNS) and Life Member of Indian Academy of Neuroscience. He has organized, participated and presented in various meetings and workshops around Europe and Asia and has also served as an invited speaker in conferences and graduate schools in Europe and India.

Dr. Diwakar's research uses principles from Electrical Engineering and Informatics to study cerebellum and its functioning.  His research has shown how noise is represented in extracellular neuronal tissue besides developing multi-scale mathematical models of the cerebellum granular layer. The current work at his lab is on Computational Neurophysiology, Neuromorphic Hardware and Bio-Robotics besides pedagogical techniques for enhancing Biotechnology laboratory education through ICT.