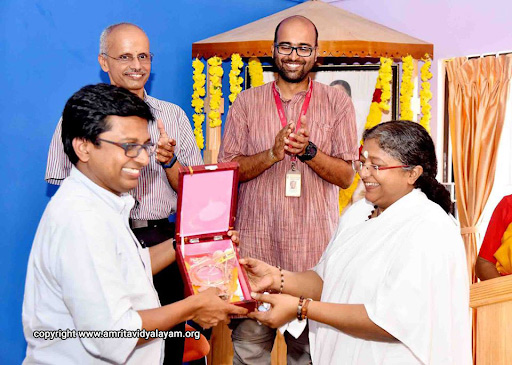 The Atal Tinkering Labs at Amrita Vidyalayam Puthiyakavu school was recently selected as “Star Atal Tinkering Lab of the Year.” The Atal Innovation Mission, set up by the NITI Aayog, has established Atal Tinkering Laboratories in schools across the country with the objective to cultivate the spirit of curiosity and innovation among young minds.

The Makerspace team from AMMACHI Labs were thrilled to hear about the recent honorary title, as it was through their mentorship and care that the labs were able to raise the bar of innovation and participation even higher. The Makerspace team designed and set up the Atal Tinkering Lab (ATL) in two Kerala Amrita Vidyalayam Schools. Akshay N., Gayathri M. and Parvathy Krishnan (Amrita Alumni) were selected by the Atal Innovation Mission (AIM) as “Mentors of Change” and have dedicated a lot of their time and energy into making this lab into a state of the art space for students.

In 2019, the Makerspace team set up the Student Aeromodelling Club in the school as a part of the ATL–– the first of its kind at school level in Kerala. 22 students in the club participate regularly in workshops that focus on aero modelling, flight avionics, flying skills. Several motors and aeromodelling materials from the aeromodelling club at Amrita Vishwavidyapeetham are being used to provide hands-on experience for the children to build drones. Despite the challenges with COVID-19, the AMMACHI Labs team has provided several online mentoring sessions this year to encourage children to keep innovating and devise out-of-the box ideas.

The students from the Atal Tinkering Labs have also displayed their impressive talents at global and national forums. In 2019, four students from the school travelled to Thailand to present their innovations and research at Fablearn Asia 2020, an International Symposium held at the King Mongkut’s University in Bangkok, Thailand. In November 2019, three students, who were coached and mentored by the AMMACHI Labs team, gained national recognition through an experiential science innovation competition called the Raman Awards.  Two were selected for the national finals and one student became the “all India winner” in the junior category.

The Makerspace Team also set up a Disaster Management Club as a part of the ATL in the school. This was inaugurated by Dr. Shekar Lucose Kurikose, Kerala State Disaster Management Authority (KSDMA) and Head (Scientist), State Emergency Operations Centre, Govt. of Kerala on Dec 3, 2019. Several senior faculty members from Amrita Vishwa Vidyapeetham were also present as invited guests for the event. In their address to the students, they emphasized on the importance of disaster preparedness and the multitudinal ways in which Amrita Vishwa Vidyapeetham worked with volunteers from Embracing the World as first responders in various disaster management efforts around the world. Dr. Shekar shared several insights and practical suggestions regarding disaster preparedness from his experiences leading the disaster management efforts of Kerala state during the recent floods. Dr. Sekhar was impressed with the children’s work, and invited them to conduct similar workshops in his office for schools in Thiruvananthapuram.

There is a famous quote by Confucius “I hear and I forget. I see and I remember. I do and I understand”. The Atal Tinkering Labs at Amrita Vidyalayam Puthiyakavu school regularly gets recognition for their incredible work and we at AMMACHI Labs are proud to be a part of this initiative that supports learning through doing.